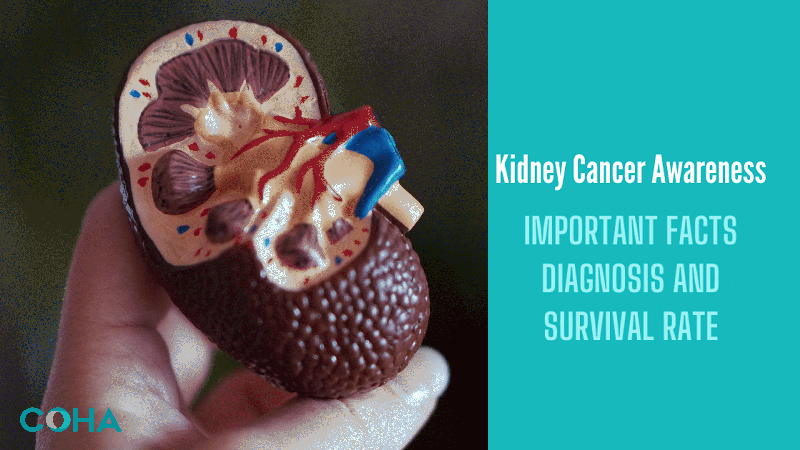 Kidney cancer often develops in tubules that help filter the blood and excrete waste. Cancer develops when cells in the tubules’ lining start growing uncontrollably. Kidney cancer is the 6th most common cancer for men and the 8th most common cancer for women. This year, it's projected that about 73,750 people in the United States will be diagnosed with kidney cancer, and 14,830 people will die from it. The 5-year survival rate of this cancer is 75%, but it varies according to several factors. Here’s everything you need to know about kidney cancer.

The stages of kidney cancer are based on how far cancer has spread.

Stages 3 and 4 signify that cancer has spread to other body parts.

When Is It First Diagnosed?

Blood and urine tests, biopsy, and imaging tests like CAT scans, MRIs, x-rays, cystoscopy, and nephro-ureteroscopy are used to diagnose kidney cancer. The choice of test depends on the cancer type, the signs and symptoms of the disease, the patient’s age, and medical condition.

Contact Chesapeake Oncology Hematology Associates today if you have any questions regarding kidney cancer.

What Does Kidney Cancer Do to Your Body?

Kidney cancer may not cause any health-impacting symptoms in the early stages. However, when the condition progresses, there are symptoms such as:

Yes, it can spread to the lungs and surrounding organs which is known as metastatic kidney cancer.

When Should You Get Screened for Kidney Cancer?

Also Read: Everything You Need to Know About Multiple Myeloma

Everything You Need to Know About Multiple Myeloma

The Most Common Cancer Myths, Misconceptions, and Facts